What to Expect During Your Visit

Kate Morgan – a young woman who checked into Hotel del Coronado in 1892 – never checked out. Instead, it’s thought her lovely likeness and gentle spirit remain as the resort’s resident ghost. Learn more about her story.

Who Was Kate Morgan? 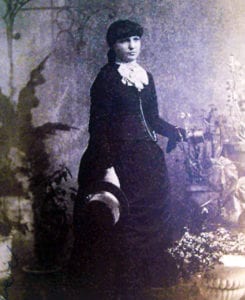 Kate Morgan, age 24, arrived on Thanksgiving Day, alone and unhappy. According to hotel employees, she said she was waiting for a gentleman to join her. After five lonely days, Kate took her own life.

At the time of her death, police could find nothing to positively identify her, so a description of Kate was telegraphed to police agencies around the country. As a result, newspapers began to refer to Kate as the “beautiful stranger.” After Kate Morgan’s identity was confirmed – she was married but estranged from her husband – it was surmised that she had arrived at The Del hoping to rendezvous with a lover.

Kate had been employed as a domestic in a wealthy Los Angeles household. From there, she traveled by train to the hotel, where fellow passengers reported that a woman matching Kate’s description had argued with a male companion, who then deserted her en route. During her stay, Kate was described as sickly and sorrowful, venturing into San Diego to buy a handgun, and the San Diego coroner later confirmed that Kate had died from a self-inflicted gunshot wound.

The Ghost of Kate Morgan

According to the hotel’s book, Beautiful Stranger: The Ghost of Kate Morgan and the Hotel del Coronado, since that time, guests and employees have attested to ghostly goings-on. Most have to do with Kate’s original third-floor guestroom, where visitors have experienced flickering lights, a television that turns itself on and off, breezes coming from nowhere, inexplicable scents and sounds, items moving of their own accord, doors that randomly open and close, abrupt changes in room temperature, and unexplained footsteps and voices. The story of Kate Morgan continues to intrigue hotel visitors, and the room in which she stayed is the most requested guestroom at the hotel.

There have also been Kate sightings in hotel hallways and along the seashore. Another very “active” area is the resort’s gift shop, Est. 1888, where visitors and employees routinely witness haunted happenings and giftware mysteriously flying off shelves, oftentimes falling upright and always unbroken.

The book, Beautiful Stranger: The Ghost of Kate Morgan and the Hotel del Coronado is the official account of Kate Morgan’s 1892 visit and contains a chronology of Kate’s hotel activities; a transcription of the coroner’s inquest; dozens of newspaper reports about Kate’s stay; vintage photos of the hotel; as well as detailed descriptions of paranormal sightings. Beautiful Stranger can be purchased through the hotel’s website at store.hoteldel.com.

Spa & Salon at The Del

Indulge your mind, body, and spirit. Inspired by the healing power of the ocean, our Spa & Salon offers an array of luxurious treatments and wellness activities that leave you feeling relaxed and refreshed.

Make America’s most beloved beach the backdrop to your most beloved memories. From private beach bonfires with s’mores to plush pool cabanas and surf lessons, make new memories in a magical beachfront setting.